It was a balmy 19ºC, last Tuesday, yes that would be Tuesday, February 21st 2012, a full 10ºC above average and my mind, oh well I'll be honest my stomach, began to wander to thoughts of light, summery type foods not the unending menu of comforting winter warmers that have made up my diet for the last few months. 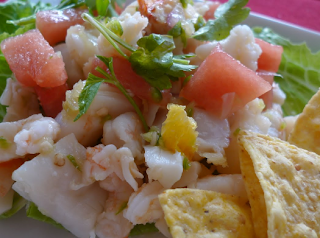 One such dish (or whole school of cuisine to be more accurate) came to mind as the zeitgeist put the word ceviche into my frontal lobe.

It's pronounced "say-bee-chay" and if you were unkind, you'd describe it as South American sushi. I'm not a naturally unkind person so I shan't demean this wonderful style of food even though the principle ingredient(s) are raw fish.

Apparently ceviche dates back to Inca times, when fish was preserved in salt, fruit juice and chile peppers, which has to make it just as ancient as the Japanese variant. Whilst the citric acid in limes, which is a popular marinate in countries such as Peru, will alter fish proteins to turn the flesh opaque and give it the appearance of being cooked, it will remain raw so using the freshest and cleanest of fish is paramount.

Although sea bass is a favourite in Chile with grapefruit juice and cilantro (coriander to you and me) and in Ecuador shrimps and ketchup are favoured any quality white fish or shellfish will suffice. Ceviche is often served with sweet potato and corn on the cob.

Ceviche is becoming very trendy outside of South America so this may be a perfect addition to your spring menu as a starter or as a sharing platter:

Preparation Time:  about 3½  hours (½ hour for the prep and 3 hours for the marinating)

*A brilliant resource is UK Chile Head's excellent website on all things "8-methyl-N-vanillyl-6-nonenamide" and for supplier details.

Cut the fish into small pieces: You can dice it or leave it in pieces up to 1 inch square, but remember that the larger the pieces the longer it will take to marinate.

Salt the fish, then cover with the citrus juice in a non-reactive (glass or plastic) container with a lid. Add the sliced onions and the chiles.

Chill this in the fridge for at least 3 hours, you should note that the larger the pieces of fish the longer the marinating takes.  To check if it is ready for eating take the largest piece and see if the centre is still raw looking and the outer layer opaque.

To serve, make a bed of the onions and chiles and top with the fish, garnishing with chopped coriander.

Ceviche is so sharp and acidic it cries out for beer and tortilla chips as an accompaniment, even though you won't find tortilla chips in Peru, and as a total offering why not make a meal deal of it with a gold tequila?

This recipe will make approximately 12 servings … the costings I will leave to you.

For the brave amongst you, and to make the most out of the ingredients, you should reserve the marinade which is known in South America as "leche de tigre" or tiger's milk. Served in a shot glass, brightly coloured from the spicy chile peppers, and sometimes mixed with vodka, tiger’s milk is considered a great cure for hangovers - although I won’t personally vouch for that!
Posted by Publican Sam at 14:08