Bread and Bitter ... or time to use your loaf!

Have you noticed how many "The Campaign for …" there are? Just typing in those three words bring up over a billion results … for Oxford Thinking, to Protect Rural England, for Wool, for Drawing, for Learning, for Better Transport … the first half dozen in my search results. Of course we in the pub trade all know about CAMRA and CAMRGB but one which you may not have heard of given its inception was only 2008 is the Real Bread Campaign

Beer is widely accepted to have been in existence for over 6,000 years with the Sumerians of Mesopotamia recording a recipe some 4,000 years ago. Anthropologists, however, will tell you that somewhere between ten and fifteen thousand years ago our nomadic, hunter/gatherer ancestors stopped wandering around and settled down to grow things … among the first was wheat, from which not only beer comes, but bread.

So much for the potted history, but what has this to do with pubs? Well if you subscribe to the view (as I do) that 'sustainability & localism' are not just a post-industrial fad then the Real Bread Campaign (RBC), with its myriad of traditional millers and artisan bakers could be just the USP to differentiate your pub from those around you.

Whilst the big boys march on, gobbling up ever more of the declining pub market place and consumers are squeezed out of our pubs by a rapacious Treasury one thing that is bucking the trend has been real / craft beer and the preponderance of high quality food in pubs today.

According to RBC the definition of Real Bread is:

Sound familiar? In this definition is the key to a USP that not only ties into 'real beer', 'slow food' and 'green consumerism' but also has many health benefits. From this simple starting point the Campaign finds ways to make bread "better for us, better for our communities and better for the planet. " Ways RBC suggests this can be done, include:
But I still don't get the point, what has this to do with pubs? Think about it, locally sourced, hand made and better for you than the crap we usually by from supermarkets and commercial bakeries … what's not to like? The Flour Advisory Bureau reckon 99% of UK households buy bread, 44% of men and 25% of women eat it twice a day and that 97% of bread is either bought from supermarkets and high-street bakers … what a market-place to exploit!

We all search for differentials to give our pub the edge over the competition, we all work incredibly hard to make sure our premises are welcoming, our beer bright and our food appetising … so why not add a further difference that the big boys will not take up quickly?

Just one suggestion from the RBC website for budding bakers is to approach their local pub and see if the kitchen can be used out of normal cooking sessions. Think about this one … you could rent out your kitchen (overnight or early morning perhaps) when you aren't using it and it isn’t paying for itself and you could have the added benefit of the aromas of freshly baked bread to add to your pub's 'ambience' and 'artisan' bread baked on the premises for your menu. I used a similar strategy with great success by allowing a specialist vegetarian/vegan caterer to use the pub kitchen "out of hours" - not only was part of the pub asset used to full effect but we were also able to offer high quality food to our vegetarian/vegan customers.

Studies have shown that on average 76% of money spent with local businesses is re-invested locally as opposed to only 36% re-investment by national chains, but we all know that from jobs we farm out to regular customers, such as plumbers, painters, builders etc who drink in our pubs. Not only do we often get 'mates rates' but we also see a fair amount of expenditure re-invested by those trades-persons back over the bar. Creating a sustainable partnership with a local artisan baker within your premises could provide a valuable reputational boost … so we can't all be beer and brew-houses (the tie, space or finances might preclude that) but many pubs could be beer and bake-houses with little difficulty. Even if you can't go the full hog of giving up your kitchen on a permanent basis, why not offer your facilities to a local baking group, in a return to times long ago when all the bread in the village was cooked in just one communal oven? Go one step further ... set your own group up.

Loaf in Birmingham, have become tenants of Everards the brewer, who have purchased premises for the new Loaf HQ as part of Everards’s ‘Project Artisan’ – an innovative scheme to purchase and then lease out buildings suitable for artisan food and drink businesses that need to expand, initiated by Everards after the success of their project to convert pubs for micro-breweries (Project William). Everards investment in the property means that Loaf can take on a bigger and more suitable premises than we otherwise could have done.

Increasing numbers of pub customers are what LOHAS (Lifestyles of Health and Sustainability) marketers call “drifters” who:

RBC taps into all of these drifter aspirations especially as an easy way for them to buy 'ethically' without having to really think about it … LocAle from CAMRA does exactly the same. Food miles, beer miles, short grain chains (RBC's version of food miles) all add to the attraction of the proposition. Mintel the market research experts say

"Those companies that cannot keep up with the progression of LOHAS consumer demand risk losing market share."

So full asset use, local interaction and 'green credentials' combine to provide a USP that the big boys will be loathe to emulate, not bad from something that only really requires four ingredients, flour, salt water and yeast. Check out the RBC website it has a fantastic set of resources on all things bread and more than likely will put you in touch with someone looking to bake locally.

If you need any convincing not to buy commercially produced bread take a look at this from the Gaurdian newspaper: 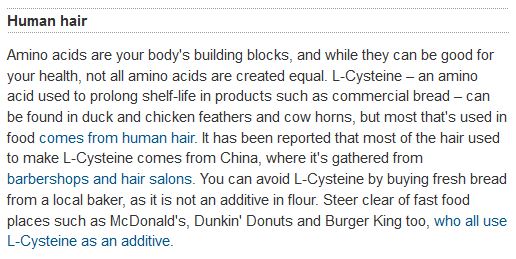